Can Police Tell If Someone Is Driving High? 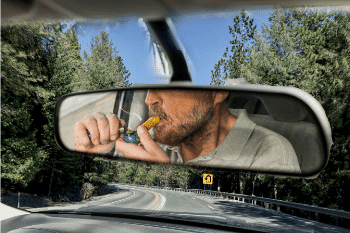 Driving high is a crime. Impaired driving, in general, is illegal, but many drivers assume that police won’t know that they’re high. In fact, many people believe they drive better when they’re high (they’re wrong).

The 2018 National Survey on Drug Use and Health found that 12.6 million people had driven while under the influence of illegal drugs within the previous year. With drug-related crashes on the rise, law enforcement is putting a greater focus on drug-impaired driving.

Regardless of your beliefs or opinions on marijuana and driving high, it’s important to understand how police determine whether drivers are drug-impaired.

“Cannabis and alcohol have immediate effects on multiple driving skills in a dose-dependent fashion,” said Robert Glatter, an emergency room doctor at New York’s Lenox Hill Hospital, “but the effects of cannabis vary more between individuals than they do with alcohol mainly as a result of tolerance, method of inhalation or ingestion, and variable absorption of THC.”

It can make you paranoid, distort your perception and cause drowsiness.

Much like alcohol, driving high can cause you to:

These are all signs of an impaired driver, and police will absolutely pick up on these signs. Do they necessarily know that you’re high? No. But it’s enough to suspect that you’re driving while impaired.

So, how exactly do police know that you’re driving high? There is no breathalyzer for marijuana, but in addition to looking for signs of impairment (like the ones listed above), law enforcement uses drug recognition experts, or DRE, to determine if someone is driving while under the influence of marijuana.

DREs use a special protocol that’s designed to determine whether a person is under the influence of mind-altering drugs. These protocols won’t specify whether you’re high on marijuana, cocaine, or methamphetamine, but they look for physiological and behavioral signs of drug use.

These drug recognition evaluations are nationally recognized and used by law enforcement across the country. They look at several things, including:

When performed properly and in a controlled environment (like a police station), these tests generally hold up in court.
Take, for example, the State of Nebraska v. Jacob Daly case. The defendant was found guilty of driving while under influence of marijuana by a jury. He appealed to the highest court in the state. One of his arguments was that the DRE evaluation is flawed. However, the justices found that the 12-step protocol allowed the officer to form an opinion “based upon all of the relevant observations,” and was, therefore, reliable enough to be admissible.

While these tests are difficult to challenge, it’s not impossible. Still, it’s important for drivers to understand that these tests do hold weight.

It’s also important to note that because these tests can’t tell what drug you’re on, there’s no way to differentiate between legal and prescription drugs. People can and do get pulled over for being impaired by a drug prescribed by their doctors.

Some police departments are using a new test, called the Dräger DrugTest 5000, to determine whether drivers are high. The test uses a simple mouth swab to detect marijuana, cocaine, methamphetamine, opiates, methadone, amphetamine, and benzodiazepines. It can check to see if these substances are in the bloodstream, but it can’t determine how much.
While the accuracy of these tests has been called into question, it is yet another tool that law enforcement is using to curb impaired driving.

As marijuana use becomes more widespread (medical and recreational), law enforcement will continue to adapt and find ways to determine whether drivers are under the influence of drugs.

Currently, DREs are the primary method of determining impairment, but more devices like the Dräger DrugTest 5000 are likely to become the norm in the near future.

If you think you’re undetectable while driving high, you’re not. Police are trained to spot signs of impairment. To protect yourself and others, stay off the road when you’re high. Let a sober driver take the wheel.

If you have been arrested and charged with driving high or under the influence of alcohol, reach out right away for a free consultation to discuss your case.